The Sixth Annual Meeting of the Australian and New Zealand Association of Mathematical Physics will be hosted by the Department of Mathematics of the University of Auckland and held at the Spencer on Byron Hotel in Takapuna, Auckland in New Zealand from 30th January to 1st February, 2018. Takapuna is a central, coastal suburb of Auckland, popular for its beach, shops, cafes and restaurants.

An additional day, 2nd February, will be dedicated to a celebration of the career of Ernie Kalnins in an event titled Harnessing hidden symmetry – geometry and superintegrable systems (details are available here). 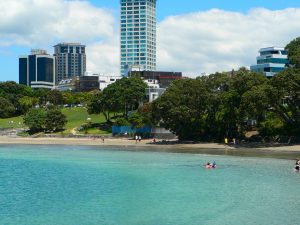 This prize ($500) is awarded for the most outstanding talk by an ANZAMP student member or recent graduate ANZAMP member (graduated 12 months prior to the meeting) presented at each ANZAMP meeting. The prize is named in honour of Professor Anthony J. Guttmann, who has been, and continues to be, a leading figure in the mathematical physics community in Australia. Among many distinctions, Tony Guttmann has a distinguished research record in statistical mechanics, was President of the Australian Mathematical Society and was one of the leading figures in the establishment of the Australian Mathematical Sciences Institute. Tony is renowned for the guidance and wisdom he offers to his colleagues and students, and he is a tireless advocate of programs for talented students in mathematical physics, and mathematics more generally.

Winners of the A. J. Guttmann Prize